We recently escaped the summer heat to spend a few days near Denver. I wanted to go mountain biking, and we all wanted to stroll around as a family without getting flayed and fried under the sun. We also didn't want to drive a lot, and we wanted to visit some friends living in the southwestern part of Denver.

By the time we weighed our options, we wound up with three nights in Golden, with the last night in Denver. Here are a few thoughts to keep in mind if you travel to the Denver area. 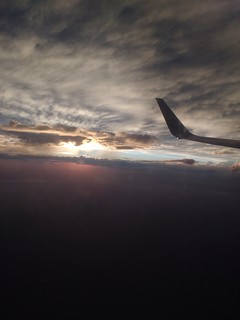 Cool Hotels – Not Easy to Find Near Golden

Maybe it was because we picked the weekend of the Buffalo Bill Days Festival (which is a far bigger deal than we possibly imagined), but we just couldn't find a place to stay right in the middle of Golden. This put us a few miles away, so we had to drive to the city center. That's a huge bummer because it's always better to walk – and parking in downtown Golden isn't exactly easy.

Even early planning won’t help you avoid getting relegated to an anonymous chain hotel in the middle of a strip mall complex. You’ll find some B&B places if you book early – but I know not everyone loves B&Bs.

Railroad Museum is a Hit

Our 2-year-old had been consuming a steady diet of the train-themed cartoon "Chuggington" on Netflix. That made a stop at the Colorado Railroad Museum a must. And it was a pretty solid hit. She loved taking a ride on a narrow-gauge train pulled by a steam engine, and she couldn't get enough of watching the model railroad.

And she was clearly paying attention: We showed her a lump of coal for the steam engine – and a month later while camping, she held up a black rock she found and asked if it was for the train. Clearly, the place made an impression. And you'll like it even if you don't have a kid. My favorite part was watching locomotives get restored in the roundhouse: There's clearly some knowledge and skill at work at theÂ Colorado Railroad Museum.

Colorado is known for its microbrew culture. Think of all the awesome breweries like Oskar Blues, Avery and Great Divide that call Colorado home. I had high expectations ... and they didn't exactly get fulfilled in Golden. Maybe it's because I've developed an insatiable thirst for the juicy New England-style IPA, and that still-emerging style wasn't prevalent.

I just didn't get a hold of many brews that blew me away; the exceptions were a gluten-free IPA that tasted way better (at the Holidaily Brewing Company)Â than you might expect, and a barrel-aged Belgian (at Barrel & Bottles). You can check my untappd activity to see if there's anything around Golden or Downtown Denver that will appeal to you. On the other hand, I did find a lot of enthusiastic and friendly brewery employees.

And Where's the Good Coffee?

Small towns like Golden often have great coffeehouses. And Golden does have nice coffeehouses that are welcoming and comfortable. But they don't seem to have figured out how to make a decent cortado or cappuccino. Maybe it's because the typical customer is coming in ordering quad-soy-extra-foam-eighteen-pumps-of-flavoring lattes. Whatever is going on, we had to go to Boulder to find a decent cappuccino at the Laughing Goat. And there was a perfectly terrific coffeehouse in Denver called The Little Owl.

You will literally stumble over great bike shops in Golden that are eager to rent you a bike. For the most part, the rental fleets seem to skew a bit enduro rather than cross country. That, and my own procrastination, are how I would up with a Surly Karate Monkey sporting 27.5+ wheels from Golden Bike Shop. I suppose this bike would be great in snow, or on a fairly flat trail. But if you're going to climb like 1,600 feet in five miles, you'll hate this bike. Which I did. The only thing this bike did well was descend in a straight line.

The trails I rode were pretty decent; there's a gradual climb out of town, and then a pretty steep grind to the top of a Mesa. From there, the trails circle the mesa with some options to cut across the center. If I'd been on my Santa Cruz Superlight, I would've had a way better time.Â

Do yourself a favor: Reserve your rental early.

If I visited this area again, I'd probably lean toward Boulder. It's a much more busy, crowded area. But it might be worth it for better trails and a good chunk more options for those who also ride road bikes.

Back to the Dinosaur Days

I enjoyed a reunion with a great friend and former band mate – we decided to split the difference in locations and meet at Dinosaur Ridge in Morrison. So we had two adults, a toddler and a drummer to entertain – not an easy order to fill, considering a drummer's lack of intellect and attention span!

We opted for the bus tour instead of walking the whole thing. We don't mind walking, but we weren't 100 percent sure what the route was like. This wound up being a good thing because the driver/docent/tour guide had a lot of great info. He even presented it in small words for the percussionist among us.

I won't spoil any surprised – let's just say that there's a lot of enlightening info presented in a very entertaining way. You'll come face-to-footprint with the past, and the whole experience is one of the better deals you'll find. Eight bucks for the whole thing. Super cheap! (As Alfred E. Neuman might say.)

Our last official stop in Denver was the Children’s Museum of Denver. It is entirely possible that the little person would've stayed there until she fell dead asleep at an exhibit. The pretend vet clinic and fire truck were enough to be a hit, but there was also a cool bubble-blowing room that would keep people of any age occupied for a good long while.

(Side story: The fire truck area had a photo montage of "A Day on the Life of a Firefighter." I recognized something missing, and asked my wife if she noticed what major firefighting activity was missing. She nailed it at a glance: "They're not hitting on women.")

There was also a camping exhibit that had people of all ages pretty happy. In short, visitors to Denver won't go wrong if they kill some time here with their little people.

What About Food in Denver? 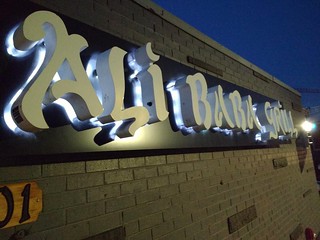 Well, we can’t honestly say that any of the food in or around Golden blew us away. There was a nice, friendly sushi place called Maki that got everything right … but it was pretty much what you’d expect from a good sushi restaurant. Back in Golden, though, we found some great places. We literally walked byÂ Ali Baba GrillÂ in Denver, and were amazed at the quality of the gyro, babaganouj and hummus. They were also extremely friendly, which always helps. If I lived in Denver, I’d be a frequent visitor. Our last meal in Denver was atÂ Maci CafeÂ – I could also eat here regularly, plowing through the panini selection. They also have a terrific nitro cold brew on tap, along with awesome coconut macaroons for dessert.