I’m trying to figure out the best canals in Phoenix for riding a bike. We have enough of them – something like 180 miles worth.

For a short ride, most of them do the trick nicely. But if you’re trying to pile on the miles and don’t like sitting at stoplights and crossing roads all the time, things get a bit tricky.

I’ve been riding the canals quite a bit over the past few years with help from the handy MAG Bikeways map, but I haven’t checked out everything first-hand. I plan to update this as I ride more of the canals. If you’ve ridden areas lately where I’m lacking knowledge, hit me up — I’ll add your quote and throw a link to the site of your choice.

One other thing I’ll mention: It’s really hard to find cold water or a bathroom close to a canal route — or really, any bike route. That’s something I’d love for the cities to fix. Without those two little details, you simply can’t have high-quality bike infrastructure. The water is especially critical. This is Arizona. It gets hot.

Here’s where I am right now.

Local cyclists were pretty excited when the Rio Salado finally sprouted a paved route stretching from Mesa to about 15th Avenue in Phoenix. But it’s had a few hiccups, like a train fire that closed the route for weeks in spring of 2020. Now in 2021, it’s closed from about 16th Street to 7th Avenue in Phoenix because of a fire under the 7th Street Bridge (seriously, this city would be so completely screwed if we ever had any major damage to our infrastructure).

The remainder of the route that stills open is still pretty good with one major caveat: the area passing through Tempe, which is a maelstrom of people with zero situational awareness. You’ll see other cyclists, pedestrians, electric scooters and those electric unicycle things weaving all over — I suspect many of them drive like that, too.

If you can figure out a way to bypass that area or at least avoid it around sunset, you’ll have a way better time.

The Grand Canal recently went through a makeover and now bills itself as the Grand Canalscape. It’s a winner for people riding a few miles. But if you’re trying to ride from one end to the other, it’s a maddening experience with all the signaled crossings — and the drivers who frequently ignore them.

The surface is fairly decent, and the parts farthest to the east are my favorite since you often have air traffic from Sky Harbor landing right over your head.

Here is the Grand Canalscape under construction in 2018.

The Arizona Canal is quite the mixed bag. From about Scottsdale Road to 32nd Street, it simply has too many street crossings to interrupt the flow of your ride.

After that, though, you have sweet underpasses for miles and miles and miles. I’ve taken it as far as the Cave Creek wash portion, where it swings north. I need to keep going far out to the west, where I’ve heard that it connects with the New River. It appears that I could swing to the north or south, depending on how much time I have.

If you head east, the Arizona Canal will cross Pima Road in Scottsdale. From there, it’s a dirt path that takes you out to Granite Reef Dam.

Canals on the South Side of the Valley

There are numerous canals on the south side of the metro Phoenix area. The majority of the bike paths along them cross at street level — no underpasses that I know of, but that might change as you head far southeast.

The Tempe Canal doesn’t go very far, but it’s a pleasant enough place to ride. It’s been awhile since I’ve ridden it (it’s on the short side), so I’ll have to go check it out again to see how many crossings have signals.

I’ve ridden the Consolidated Canal as far as Chandler Municipal Airport. There was some construction that closed the path in a few spots, but that was in 2020. To be honest, I ignored the signs and rode on — gravel bikes can do that! 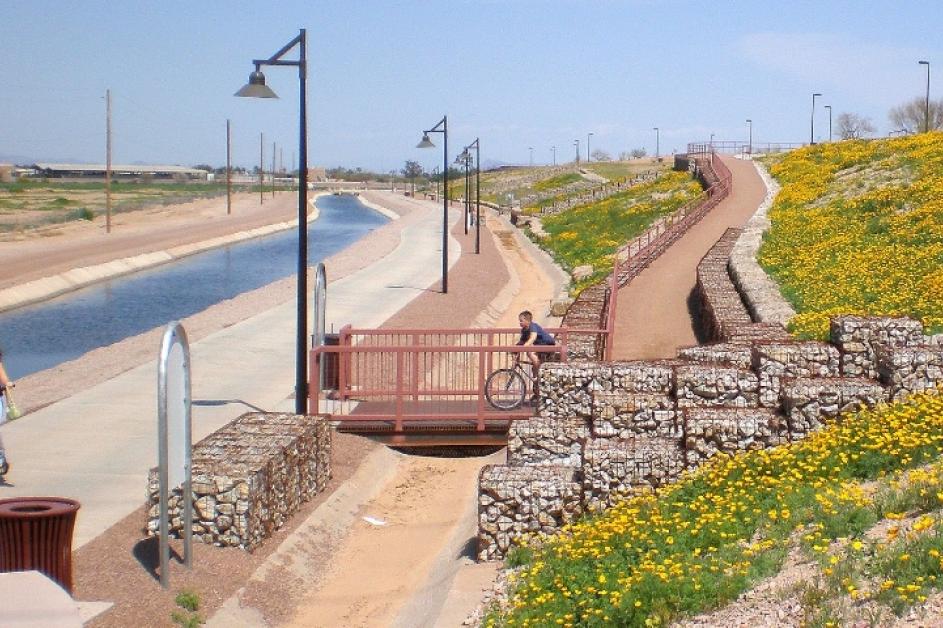 I haven’t spent much time on the Eastern Canal, but it has my curiosity. If I take it far southeast, I suspect it will have some underpasses. Unfortunately, further north everything is a street-level crossing.

The Western Canal is a straight East-West shot from about Lindsay Road in Gilbert to just short of Kyrene in Tempe; then it curves northwest and heads far west. I seem to remember a break in the bike path right around Arizona Mills Mall, though, so I wouldn’t recommend counting on it.

There’s also something called the North Branch Highline Canal. I haven’t ever tried it, so I’ll have to put it on this list for summer.

What About the CAP Canal?

The CAP Canal is huge! We’re talking nearly 360 miles from Tucson to Lake Havasu City. With this being the age of the gravel bike, this SHOULD be a perfect amenity, right?

Unfortunately not. Most of its banks are fenced off, and much of the rest is still inaccessible to bikes. Only a few sections toward Marana (just outside of Tucson) have opened to bikes. I’ve heard that could change, but the powers that be are taking their sweet-ass time. 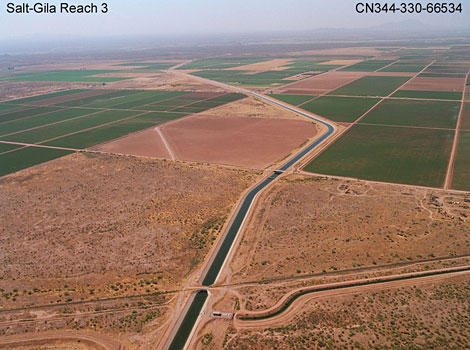 The CAP is an untapped resource of serious mileage for bikes.

So What are the Best Canals in Phoenix for Riding a Bike?

Honestly, the best canals in Phoenix for riding a bike are probably the ones closest to you. It can at least give you a little respite from cars and get you started on a decent ride.

The frustration sets in when you have to cross a bunch of streets and wind up standing around waiting for lights to change — Phoenix, after all, is a place where cars rule.

For me, the Arizona Canal west of 40th Street is where it’s at. For now, at least. With some improvements, the Rio Salado would be tops. It needs some cold water and some way to create decent traffic flow in the Tempe portion to be truly excellent. At least it has a bathroom at 7th Street that’s practically right on the path.

Does the Cycliq Fly 12CE Really Suck That Much?

48 Hours in the Verde Valley

Is the Toyota RAV4 PHEV Right For You?

How I Make My Airline Choices