La Compagnie’s 757s look stylish inside and out.

I just realized that’s in been months since I’ve done a Cool Stuff Roundup. I aim to correct that today with a few very interesting tidbits I’ve culled from various locations online.

Let’s start with some air travel.

You know it’s a favorite of mine – and that I don’t love to hate airlines nearly as much as many people. And an airline like La Compagnie could make us both like airlines even better – it’s an all-business class airline operating between Charles de Gaulle Airport, London Luton Airport and Newark Liberty International Airport, New Jersey (which is the Paris of the Eastern Seaboard â€¦ kind of. OK, not at all). La Compagnie also charges a barely even premium economy price.

For example, I priced a flight for one adult at less than $1,500. Word is a couple traveling together gets an even better price. Here’s what you get for that price: A Boeing 757-200 (previously owned by the excellent and meticulous Icelandair) holding less than 80 people; two by two seat layout with 180 degrees of recline; outlets at the seats; wifi; on-demand entertainment; seasonal menus; and a few other niceties I’d like to sample. The only downside I can see is that La Compagnie doesn’t seem to have airline alliances. So I’d have to book my flight to Newark separately, which creates a possible vector for problems. Still, I’d give La Compagnie a try next time I head to Europe. I’m sniffling and whinging a bit since I only found out about La Compagnie days – literally days! – after booking a trip to Europe on another airline for about the same price. In economy class. Grrrrr.

OK, let’s get a little closer to home with some coffee news.

If you’ve read this blog at all, you know that craft beer and top-quality coffee are my favorite beverages. When I was in Portland, I got hold of a super-delicious treat at Stumptown Coffee Roasters: a nitro-charged cold brew. It had the texture and look of a pint of Guinness, but tasted better (look, people, Guinness is mass-produced mediocrity – there are way better stouts out there).

Now, I no longer have to go to Portland for my nitro cold-brew fix: Songbird in downtown Phoenix is now pouring nitro cold brew. And soon, local newcomer Hazelrock will also be pouring nitro. This is a good time to be a coffee enthusiast in Phoenix!

Let’s shift gears back to transportation. 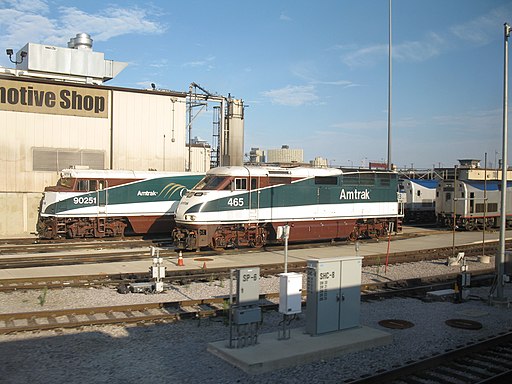 Ready to roll on Amtrak? If you’re in business or first class, you might get free digital newspapers to pass the miles.

Sorry, but I have to mix my metaphors by bringing up trains. Amtrak clued me into a nice new feature for its business and first-class passenger service: They’ll be able to enjoy unlimited access to the New York Times and Washington Post newspapers via the trains’ free onboard wifi; previously, Amtrak had distributed paper copies. Amtrak views this as an environmentally friendly move that will save 25 tons of newspapers each year.

I’d recommend swinging a deal to get the Wall Street Journal – I love that paper for its mix of serious news from around the globe and its often snarky, sly humor. Still, from a green perspective, this seems like a very nice move. Let’s also not forget that the newspaper format is kind of an unwieldy pain to handle – I’ll take it in electronic format any day.

OK, I’ve mentioned planes and trains. Let’s get boats in here – or rather, container ships.

I piqued the curiosity of two of my good friends last night by mentioning that people travel around the world via container ships. Not as crew – just as self-loading cargo. This article makes it sound awfully interesting. I could see this being a very interesting way to pass some time to do some writing, exercising and sleeping without the distractions.

If you just graduated college and you’re looking for something oddball to do, this is your answer. Right here.

Let’s wrap this up with a look at TheBornAdventurer.com, a new blog I’m publishing.

This one is about a pretty big change in my life – being that dad to a new little girl who I hope will follow my interest in seeing the world. She’s not even 9 months old, and already has a passport and been camping. This story about her first milestones is really what the blog and my style of being a dad is all about. Give it a look, and spread the word â€¦ I’m hoping to connect with like-minded parents to see what we can all learn from each other.