Lessons From 3 Months of Driving an Electric Vehicle

In early May, I starting driving an electric vehicle. I took the keys (or more accurately, the key fob) to a 2014 Toyota RAV4 EV. No, it’s not a hybrid. It’s not a custom hack job. It’s one of 2,600-ish of them made as a joint venture between Toyota and Tesla, who supplied the Model S battery and motor. It really is the compact electric SUV the world needs – the Nissan LEAF, the Chevy Bolt and most other battery-electric vehicles are all too small. Great for single people, not so great for couples or families, especially those with hobbies or work that includes hauling any gear. 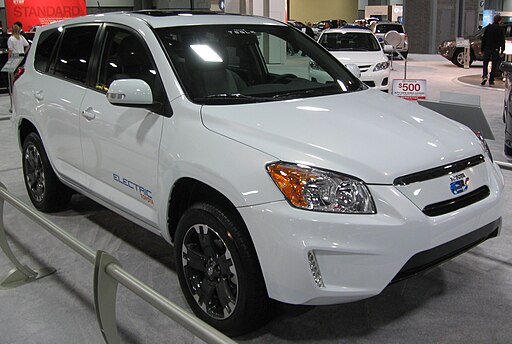 Kind of like mine, but this early concept is a different color and a few years older. (Image via Wikipedia)

My last car was a 5-speed Subaru Forester. I generally enjoy the manual transmission. And surprise! I can drive the RAV4 EV very much like a car with a manual. EVs can regenerate energy when they slow down – aka â€œregen.â€ Each brand of EV seems to have its own approach to regen, but it generally works like this: You let off the gas, and you slow down without using the brake pedal. You slow down a lot faster than shifting into neutral â€¦ all while putting a few watt-hours back into your battery. The RAV4 EV requires you to shift – using the console shifter – from D into B (see a few paragraphs below).

Here’s the shifter of a Toyota RAV4 EV. Notice two things: The B option, which engages regenerative braking, and the SPORT button in front of the shifter, which increases torque and top speed. It’s the RAV’s version of the Tesla Model S Ludicrous mode.

The 2018 Nissan LEAF has the most-aggressive regen I’ve experienced. Its e-Pedal can bring the car to a dead stop, where my RAV EV needs the friction brake to fully stop and stay still. I like the e-Pedal a bit better, but you wouldn’t believe the number of people who shout at the clouds about it every time Nissan posts about it on social media: â€œAre we really that lazy? Cars should have two pedals! It’s gonna cause accidents! Do we want people too stupid for two pedals driving?â€ Granted, Nissan’s posts completely miss the point of explaining the e-Pedal, and people seem way too eager to wallow in their misunderstanding of the benefits.

“Dang kids and their regenerative braking!”

Regen is like downshifting a manual transmission. Let off the gas slightly in the corner, and it’s like dropping down a gear. Rather than using the clutch and stick to shift gears, I use the shift knob on the center console, with the occasional push of the â€œSPORTâ€ button that boosts maximum speed and torque (awesome for merging). The knob moves the RAV4 EV between D (Drive), R (Reverse), N (Neutral) and B (regen braking). Within weeks, I reached the point where shifting is second nature. In stop-and-go traffic, I usually stay in B. The RAV4 EV won’t engage the cruise control in B, so you’ll want to be in D for long stretches without traffic.

I also do a lot of neutral coasting, which is great for squeezing even more range out of the battery.

First of all, I love online threads where people whinge about people driving an electric vehicle. One guy said “but I don’t wanna plug my car in at night.” Why, will you miss all those intellectually stimulating stops at the gas station? Yeah, who wouldn’t miss the smell of unleaded gas filling our nostrils?

Here’s a post-trip summary that goes up on the dashboard when I shut the RAV4 EV down.

OK, but back to the main point: Most cars come with a plug-in device called an EVSE, which allows you to charge from outlets – mostly from 240-volt outlets like the one on your clothes dryer. A 110-volt will give my RAV4 EV about 4 miles every hour, and a 240-volt could bump that as high as 25 per hour. Depending on where you live, you might have enough charging stations to delay getting one at home for while. I recommend checking plugshare.com since it includes a variety of networks – and even some friendly home EVSE owners who might let you get some juice.

Here in Arizona, we have enough charging infrastructure to meet the needs of the average person, who drives less than 40 miles a day. That’s well within range for anyone driving an electric vehicle. There are chargers near my office, my home, good local coffee shops and even a decent craft beer bar. I never go anywhere just to charge. I’m shopping, having a coffee, grabbing some dinner – every time I charge. I’ll eventually get a home charger, but I’m holding out for a Zappi, a cool charger from England, to make its way to the US. It’ll take power directly from my solar system.

This week, Redline Electric installed a dedicated 240-volt line and outlet. This solves the problem of tripping a circuit breaker if we started pulling too much from the 110-volt circuit I’d previously used. And it’s also considerably faster. I’ll go from about 4 miles of charge per hour to around 12.

Charging networks matter. Chargepoint is by far my favorite. You can start it up with a phone app, but that can be a hassle if you have a bad signal in a parking garage. I much prefer the little keyring cards. I also give serious props to Volta, which sells advertising space on its chargers to provide free charging.

On the other hand, no network is as bad as BLINK. Their stations are often broken or have illegible screens. Here in Arizona, they charge by time instead of energy use, and the resulting fees are on-par with gas prices — which is far in excess of the cost per kilowatt-hour. Even worse, BLINK has somehow weaseled their way into many government buildings and snagged exclusivity contracts. I will only use them in an emergency.

One more fun thing to note: When you’re charging on a network, you can usually view how long you’ve been plugged in and how much juice you’ve gotten through a smartphone app.

It would also be a great step forward to government entities to think about installing charging stations and/or outlets. For example, when I do a 6-hour mountain bike race, it would be great to let my car get some electrons while I sweat my butt off.

You’ll Notice Others Driving an Electric Vehicle by Their Habits

Being accustomed to driving a manual transmission, I constantly scan the traffic around me. And I notice the cars all around me that start slowing down early before traffic lights. Sure enough, when they get close enough, I notice they are people driving an electric vehicle.  (usually Teslas). They take advantage of the regen. The Tesla regen is less-aggressive — to the best of my knowledge — than the Nissan, so they were carefully watching the traffic flow to start braking early. Don’t waste those electrons.

EVs also accelerate differently. Put your foot down on the accelerator, and you’ll feel like you’re on a Japanese bullet train. But it’s more than speed: The lurch you’re used to when a regular car shifts is completely absent.

The quickness of EV acceleration has also helped me catch a few traffic lights I normally wouldn’t make — and generally without going much above the speed limit. It accelerates that much better than a gas car.

Driving an Electric Vehicle is Like a Video Game

EVs are big on giving drivers data. Mine being four years old, it lags behind the current generation. But I know exactly how many kilowatt-hours I’m using, how much I’ve regenerated and all sorts of other stuff. When I shut my motor off, I get a summary of the trip broken into average speed, current cruising range, average kilowatt-hours used and a few things I can’t remember. There’s also a neat map that gives you a range estimate, either for one-way or round trip.

Here’s the main infotainment console. I usually keep the energy monitor option up there.

You’ll also find that you’ll use quite a few apps for driving an electric vehicle. You’ll use them for finding charging stations, though you’ll eventually memorize all your favorites. But you can also monitor your charging status, charge to cost (which is sometimes free) and a few other odds and ends.

After Driving an Electric Vehicle, the Internal Combustion Engine Sucks

I had to rent an SUV for an out-of-town work trip. I put about 250 miles on a Hyundai Santa Fe Sport. Just sitting it in, the interior felt cheap and overdesigned; there was this weird cage near the center console that I can’t even begin to explain. Then there was the ICE. Noisy, slow to accelerate. Every few miles, I kept looking for a warning light that the emergency brake was one. Nope. The engine is just that crappy compared to driving an electric vehicle.

Hyundai is working its way into the EV space with a few entries, and everyone is pretty excited about the Kona. I just hope Hyundai is better at EVs than they are at ICE cars, because the Santa Fe Sport absolutely sucked. Its interior is noticeably plasticy and low-grade, and that’s coming from a guy who rarely notices that sort of thing. The RAV4 EV isn’t luxurious, but the interior is miles ahead of the Hyundai Santa Fe.

The feel of driving an EV is addicting. I can’t imagine owning an ICE car again.

People who drive electric vehicles are pretty enthusiastic, especially online. If you’re considering a particular model, join a forum for it. Read the threads, post some questions. You’ll find a lot of support. The people at the MyRAV4ev.com forum have been amazing, and I’ve seen that other boards are just as active and helpful.

Most drivers don’t realize this, but EV tech is here. It’s feasible and real. You can drive 250 miles on a charge, charge to nearly 80 percent in a half-hour and keep going (you need to stop every so often to use the bathroom anyway).

Now, the car industry needs to put it together for most people to start driving an electric vehicle. My RAV4 EV needs a successor: an affordable crossover/light SUV that can go 250 miles and then suck up some electrons through a CHADEMO port and keep going a few times. It would be best to have liquid-cooled batteries, especially if you live in a hot climate. When this happens (and it’s not far away), the internal combustion’s decline will be fast and brutal.

Are there any other new EV drivers out there? What would you add to the list? I suppose you veterans of driving an electric vehicle can also comment. Let’s hear it!