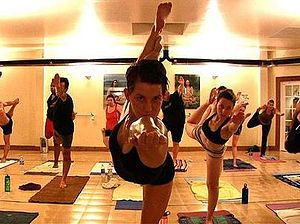 This is not Hot Yoga University, because taking photos in yoga class is kind of creepy. But you’ll do stuff like this. (Photo credit: Wikipedia)

Table of Contents hide
1. It’s a hot yoga class, as you probably guessed from the name.
2. It’s reasonably priced
3. The Hot Yoga University studio itself rocks.
4. You won’t have ridiculous music blaring at you during a Hot Yoga University class.
5. The instructors are fairly low key.
6. The basics are a bit different.
Hot Yoga in Scottsdale – Wrapping it Up
Share this:
Like this:

Hot Yoga University at a Glance

NOTE: I wrote this review of Hot Yoga University a long time ago. Since then, it’s moved a few blocks and changed ownership. I like it even better now. This still gives you the gist of what to expect.

I’m a terrible yoga dude. First, I absolutely will not call myself a yogi (though I’d love to somehow earn the title swami). And I have a low tolerance for the baggage that comes along with yoga: If you get all New Agey on me, I will laugh — openly. If you turn yoga classes into Janet Reno’s Dance Party, I will find a new studio. Straight up.

This means I hope Hot Yoga University stays exactly as it is. Does that mean it’s perfect? No – but it’s close enough. Let’s take a look at this much-needed addition to South Scottsdale — and why I like it so much after five classes.

1. It’s a hot yoga class, as you probably guessed from the name.

I like the extra challenge from the heat. You burn more calories, you get a deeper stretch. Local yoga folks will immediately think of Sumits, which offers hot yoga all over the Valley. You’ll see more about how it stacks up to Sumits later.

Especially for a hot yoga classes. I did the new student special â€¦ $20, 20 days unlimited. Drop-in classes are an impressive $10. I defy you to beat that anywhere, hot yoga or not. Four classes in, I’m convinced Hot Yoga University is not just cheap yoga – it’s good yoga.

Good bathroom, showers, perhaps the coolest floor I’ve ever set foot on (it reminds me of something you’d see in a 1970s Disney attraction – a funky faux-Space Age look, but with claimed anti-stench/microbe/funk properties). The only weirdness is the cloth heating duct that carries air throughout the room. Tall guys – ahem – stand a good chance of whacking it with their arms during certain poses.

4. You won’t have ridiculous music blaring at you during a Hot Yoga University class.

Some classes have no music. This is the easier of the two classes, but you can find ways to add to the challenge. The HotYasa is the Full Meal Deal of the two – it’s faster, with more flowing from pose to pose. It has music, but it’s not loud enough to obscure the instructors.

5. The instructors are fairly low key.

I have yet to encounter one who wasn’t competent and also very nice. They’re not the breathy-voiced, serene/loving-to-the-point-of-obnoxious sorts you see at other yoga studios. They’re being themselves, not how people expect yoga instructors to be. Some seem a bit new to the job, but they’ll settle in.

6. The basics are a bit different.

They do some different stuff with their breathing techniques. When I took my first class around 1999 or so, I learned the three-part breath and it’s been a staple of everything since. This is a bit different. When I look around the class, I see some students who could use help refining their postures (I probably could use the reminder with some of mine, too). So the Hot Yoga University instructors could possibly dispense a bit more advice.

I remember Sumits hot yoga being more difficult, but I could be wrong – I’m several months into the most comprehensive weight lifting program I’ve ever undertaken, and it’s translated well into yoga. I can now do things that I wasn’t able to do during my previous experiences at Sumits.

Hot Yoga in Scottsdale – Wrapping it Up

That about wraps it up. It’s also close to my house. That’s a factor, but convenience can’t make a half-assed hot yoga class good. The classes at Hot Yoga University are very good, and all the other stuff just makes it that much better. The quiet classes and laid-back feel makes me rate it above Sumits – and the lower price doesn’t hurt.