The Phoenix area is pretty new. We consider anything approaching a century old to be an ancient relic. That means we’re short on truly historical buildings – but it also means we have some really weird buildings from adventurous days in architecture. I’ve picked three that stand out. Given the bottom-line, play-it-safe approach to architecture, it’s unlikely that the Phoenix area will see design this ambitious again.

Table of Contents hide
Capstone Cathedral: My Favorite of the Odd Buildings in Phoenix
Tovrea Castle
Grady Gammage Memorial Auditorium
Share this:
Like this:

Capstone Cathedral: My Favorite of the Odd Buildings in Phoenix


When my family moved to Arizona in 1980, this building was attracting flocks of the faithful. This distinctive building dates to the early 1970s – it seats 4,000 in its four-sided pyramid bulk. At night, the then-illuminated green glass mini-pyramid at its top could be seen for miles back when there were far fewer building surrounding it.

Preacher/faith healer Neil Frisby commissioned the cathedral for his ministry. He claimed “God” told him where to build. Clearly, the almighty has a nose for real estate – the property is worth a fortune now. Frisby, however, died and the cathedral’s future is murky. It appears that the building is somewhat maintained. I hope it never gets demolished, because it is retro ‘70s-in-Phoenix goodness that can’t be replicated.

Just about every traveler catches a glimpse of this wacky landmark. It’s near the flight path of Sky Harbor International Airport and is easily seen from the 202 and 143 freeways. Construction started in 1928 when an Italian immigrant had visions of a resort. It then passed along to a meat-packing magnate for whom it’s now named. Tovrea Castle is still technically unfinished. 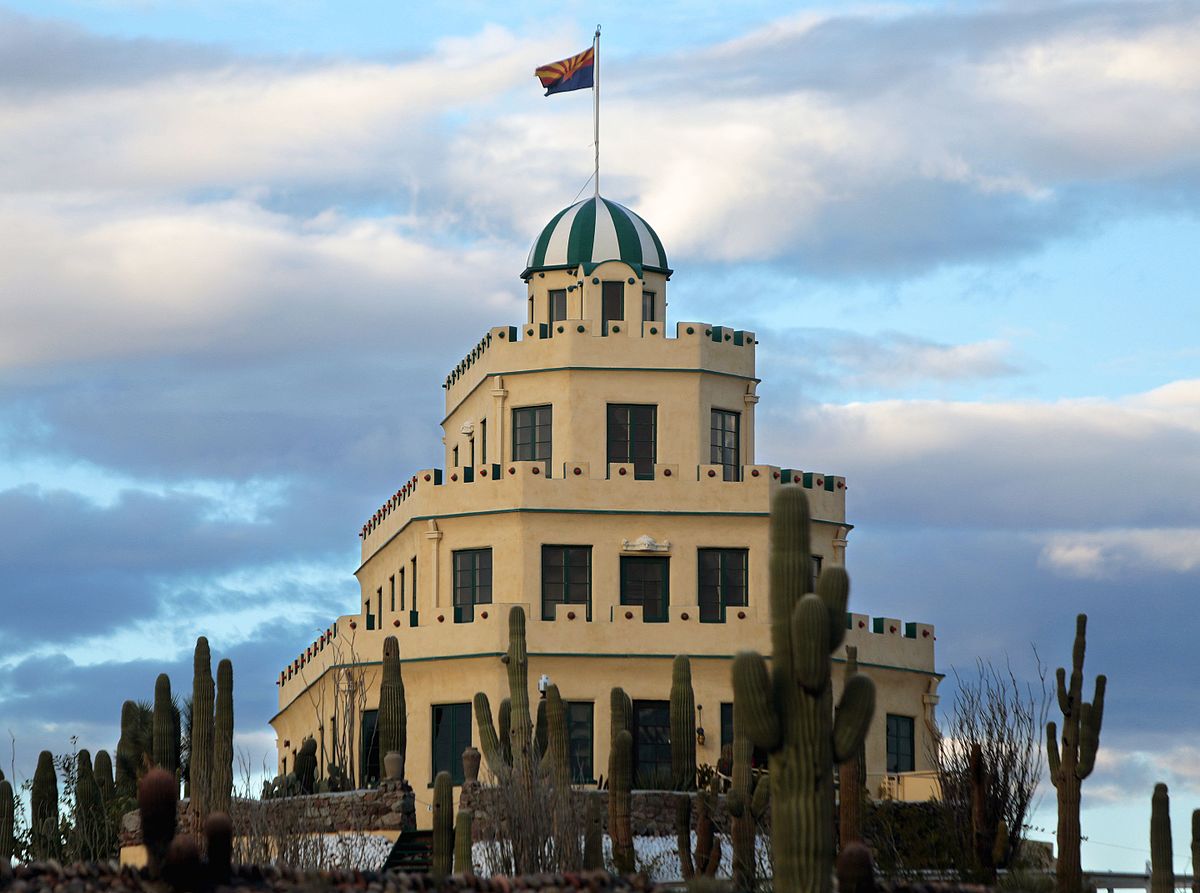 The city of Phoenix has plans to turn it into a park or museum. Aside from the wedding cake-like appearance, the castle is surrounded by a good-sized cactus forest. Visitors can stroll through the cactus garden to check out more than 100 varieties of cacti – about 5,000 specimens in all. Not only is this some crazy architecture, but it’s sharply juxtaposed to the surrounding industrial area.

I guess that’s really what makes it strange rather than just it’s appearance.

I can’t offer a list of crazy Phoenix-area architecture without including some work from Frank Lloyd Wright. And Grady Gammage Memorial Auditorium is a perfect example of a style some consider genius, and others madness. Now matter which way you lean, Gammage Auditorium will catch your eye. It dominates the southwest corner of the Arizona State University campus. It opened in 1964, yet another swingin’ example of the architectural boldness on display in the desert.

Three seating tiers give the interior a grandeur that’s absent any other auditorium around. Yes, it’s dated. But it also grabs you by the eyeballs and doesn’t let go.