For the first time in a few weeks, I did a long mountain bike without a stash of Fuel100 Electro-Bites. I’d run completely out of them, so I dug back into my extensive stash of gels.

And here’s the weird thing: My latest ride wasn’t that much longer than the previous weekend. The temperatures weren’t that much hotter. My route actually had a little less climbing. Yet I spent the rest of my Sunday feeling pretty whooped.

Could that be the Fuel100 Electro-Bites versus the gels? That’s a tough conclusion to attribute to just a difference in on-bike fuel. But there are some things I can definitely, conclusively, unequivocally tell you about Electro-Bites. 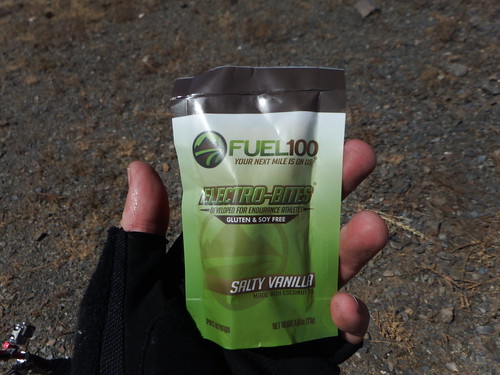 A convenient size with just the right amount of fuel inside.

A Welcome Change from Gels

For years, gels have been the THE way to refuel on a bike. They’re pretty super for races. But it has its drawbacks: Gel from open packets tends to get all over the place. And honestly, I can only handle so much sweetness.

The more-savory taste of every variety of the Fuel100 Electro-Bites seemed to please my tastebuds far more than gels.

I tried all the varieties: Simply Salty, Salty Vanilla, Apple Cinnamon, Salty Vinegar and Pumpkin Spice. Each flavor has the same core taste, which is very earthy and salty. That makes sense considering that potato starch is the main ingredient. The vinegar and apple and pumpkin flavors are all pretty subtle. I actually didn’t wind up with a favorite flavor. 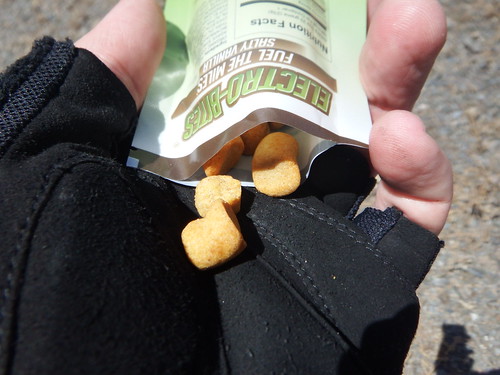 Inside, puffy little savory nuggets await to keep you topped off with energy.

Aside from the flavor, the texture might be my favorite attribute. The Electro-Bites are small pellets that have a nice crunch, but they also dissolve pretty quickly. That means you won’t be chewing for a long time and you won’t be distracted; even though this product was developed by runners, that’s great for mountain bikers who want to pay attention to the trail.

An Idea for Improving Fuel100 Electro-Bites

Packaging is one of the best attributes of gels: I use electric tape to attach packets to my top tube and handlebars, making it really easy during races to grab one, eat it and stuff the empty pouch into a jersey pocket.

That’s a challenge with the Electro-Bites packaging. There are riders out there who are skilled enough to manhandle a package of Electro-Bites, eat them and still not slow down. I’m not one of them – so I’ll have to ponder some ideas to innovate on a way to carry them. I figure there must be some sort of flip-top container I could stash in my jersey or in a stem pouch. 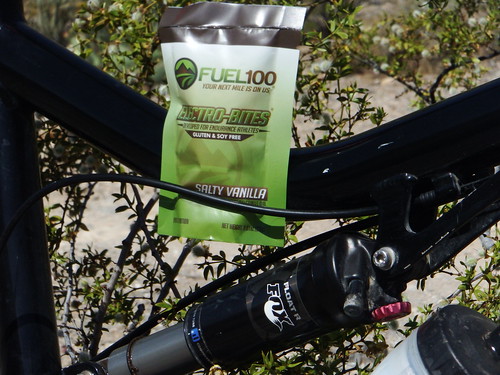 Rolling out to the trails with my last remaining packet of Fuel100 Electro-Bites.

My experience with mountain biking dates back to the days when dudes would rip up a PowerBar and stick them directly to their stem and handlebars. I don’t miss those days at all, let me tell you. We’ve been through a lot of innovation and evolution with fueling up during exercise and races, and I really like what Electro-Bites has done. I like the taste, I like the texture and I like that they work well – possibly better than gels. I know just about every other rider (especially those without sponsorships) is always on the lookout for the next big leap in sports nutrition, and Electro-Bites are a worthwhile entry to the list.

Their price isn’t even out-of-line with other products, with a six-pack going for about $13. Chances are you’ll need to order them from the Electro-Bites website since they’re still finding traction with retailers. If you put in the effort to order some, I think you’ll like them.

Speaking of that, I need to place an order to get more – and they’ll be a go-to for races and long rides for the foreseeable future.

Disclosure of Material Connection: I received Electro-Bites for free from Fuel100 in consideration for a gear review. As always, this is not a guarantee of favorable coverage. The product still has to earn its praise honestly.

Is the Olfi One.Five Camera Better Than a GoPro?

6 Great Desserts Worth Traveling For