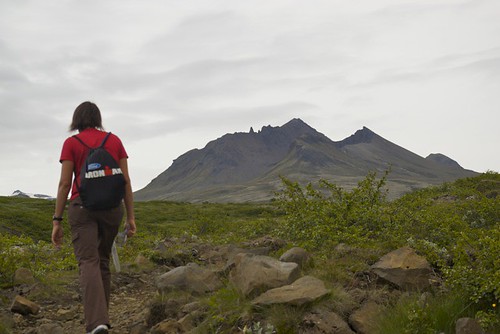 This is one of the coolest mountains I've ever seen.

There’s a magnificent mountain in the distance. I can see spires and steep slopes. It looks like the ruined castle of an evil wizard.

It’s mezmerizing. I want to go to it. It’s called KristÃ­nartindar. It’s spectacular. But it’s too far away – soon, a bus will pull up in Skaftafell to haul us off to Vik. We’re a bit low on food and water. If we were fully loaded, I’d head straight there.

When we return to Iceland, this will be a major point of the trip. We’ll come back with our camp stove and enough food for a few more days hanging out in Skaftafell. And we’ll go to KristÃ­nartindar. Oh, yes. But as it was, we just finished a loop of about six miles. 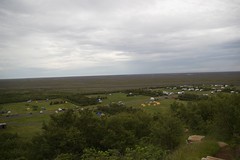 Before Kristinartindar came into view, we stopped at the famous Svartifoss waterfall (foss = waterfall). Its basalt columns inspired the architecture of the Hallgrimskirkja (kirkja = church, and klaustur = convent) that’s such a landmark in Reykjavik. It’s pretty and picturesque, and relatively empty for a place that’s in every guidebook.

We folded the tent, repacked and boarded the bus to Vik (which means bay). 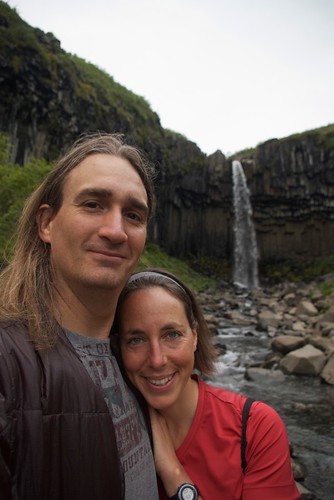 It’s a fairly quick shot to Vik, which is home to about 300 people. We have a room at the Hotel Lundi (lundi = puffin). It’s here that I accomplished another major goal of my trip: eating hákarl! This word means "shark," and it’s pronounced "howker." I have an entire post dedicated just to the next five minutes of my trip, and you should read about it and watch it. 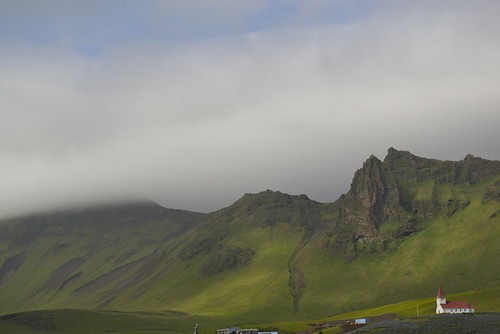 The cliffs and church near Vik.

We walk the town a bit, and have a fairly greasy roadside meal. Vik is a small town, after all! The black sand beach is a site to see, along with rocky spires in the ocean a few miles away. The sun often pokes out of the clouds, but it’s very windy. And the mountains are ridiculously beautiful.

We return to the hotel. I fall asleep while reading, and Sarah slips out to poke around a bit.

She rousts me at about 9 p.m. with the sun shining brightly, promising puffins and some sort of hobbit house.

We gamely trudge up the side of a mountain. It’s steep, and it’s about to get windy. But first, the hobbit house. You could easily miss it. It looks like a mound of grass-covered dirt with a door lying on it. And a smokestack popping out. Unfortunately, it’s locked and nobody’s home. I’d love to see inside! 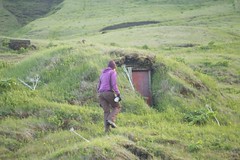 It's a hobbit house!

We get to the top of the mountain, which is completely flat. There are trails everywhere, including one to the other side. The wind was absolutely howling up there, effortlessly blowing us around and making it hard to even walk like a normal human.

The daylight would last, but our energy was on the wane. So we headed back down for a good stretch of sleep (my watch said it was night, but I wasn’t buying a word of it).

Tomorrow -- back to Reykjavik. 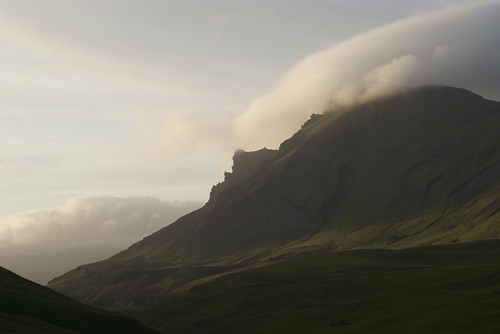 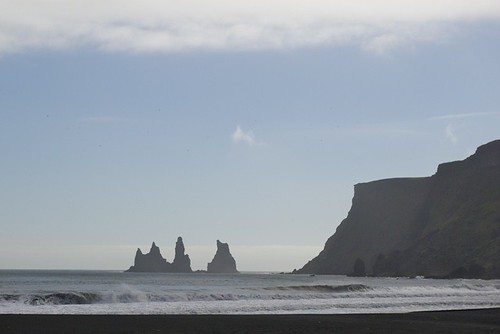 This Human-Powered Monorail is the Coolest Contraption Ever