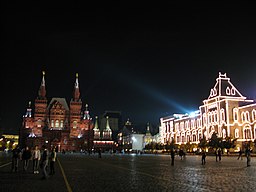 When I was 12, I never would've imagined I could visit Red Square. Which made it intriguing ...

There’s something about travel in Russia that appeals to me. I’m convinced it’s because I’m a late Cold War Kid.

One of my earliest memories is the Miracle on Ice – the dramatic U.S. hockey victory over the Soviet Union. I grew up with movies like Red Dawn. I remember wondering when we’d have a nuclear war. The Soviet Union was mysterious, dangerous, hostile. Which made it fascinating.

Sure enough, the Soviet Union collapsed. The once-feared hammer and sickle is clever marketing for selling soda. There are groups of American Airsoft players who relish the role of being Soviet soldiers, right down to accurate uniforms and gas masks.

A former colleague already has. Ryan is now in Russia for a semester of study. He writes about it in his RussianRamblings blog, and I look forward to having him drop in here to share thoughts and advice. Be sure to check out his post about the banya. Way to step into the culture, Ryan!

This is pretty awesome for Ryan, and it sounds like he’ll make the most of the experience.

In my case, a trip to Russia will likely be part of something larger. I have visions of hitting the Scandinavian and Nordic countries in addition to Russia. This is all just starting to take shape in my head. But it could be way awesome – multiple countries and some trail travel are always fun.

My Switch Vision sunglasses giveaway is still going on! Competition is heating up, with hikers and mountain bikers pitching in some great stories about the best thing they’ve ever found on a trail. Best story wins! CheckÂ this blog postÂ Â for the rules. Deadline is March 30, 2012.

A Recent Visitor’s Thoughts on the Brussels Lockdown

What’s Up with the Pyramid Peak Mountain Bike Trails?

When Should You Get a New Mountain Bike?