You’ve come to the right place.

You know I’m not really going to tell you that my Top 5 list is the sole authority on the world’s best museums. This is just a snapshot ofÂ what I like … and I want to hear your responses. To compile my list, I considered a few factors: Weirdness, content and different perspectives just to name a few. So, now I’ll get on with the list. These are in no particular order.

Iceland Phallological MuseumÂ – Reykjavik, Iceland
This museum just about 30 miles from the Arctic Circle stood in a league of its own during my visit. It has since moved back to Reykjavik, which makes it easier for more people to reach. As a curated collection of detached members, it ranks high in oddball street cred. And it appeals to my dirty sense of humor. You’ll find penises that were attached to mind-boggling array of creatures – watch out for the taxidermied whale willies. Some of them just far enough from the wall to poke the unwary. My original blog post offers a more lengthy, penetrating review. Oops, I’ve built it up and now you’re going to be disappointed.

That’s creative use of crashed airplanes.

Vietnamese Military MuseumÂ Hanoi, Vietnam
This museum is packed full of memorabilia and information from thousands of years of conflict. As you might expect, it devotes a good percentage of its space to Vietnam’s more-modern conflicts with France and the United States. I was actually surprised that much of the content was more neutral than I expected. I only saw phrases like “imperialist aggressors” and “puppet government” a few times. Gear from captured U.S. personnel have a chilling power that I can’t explain. And there’s a magnificent sculpture crafted from parts of crashed aircraft. Added bonus: The museum is in a beautiful part of Hanoi. 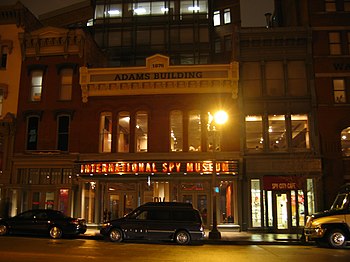 International Spy MuseumÂ – Washington, DC
“My name is Gary Wozniak. I’m a schoolteacher from Edmonton. I’m travelling for pleasure.” This was my cover nearly 10 years ago when I visited the International Spy Museum. And I’ve stuck to it like Chuck Bartowski sticks to his Charles Carmichael alias. This monument to Cold War espionage will make you shake your head in disbelief while totally roping you in with the random checks of your cover story (too much fun!). It really does need an exhibit called “Amazing Things Spies Have Stuck Up Their Butts,” though. Umm, reproductions would be fine for that exhibit. Fun factor and fascination make it a definite entry on myÂ world’s best museums list.

Museum of FlightÂ – Seattle, Washington
Let me get something out of the way: The Smithsonian Air and Space Museum has some awesome exhibits. There is nothing like seeing an actual Soyuz, Mercury or Gemini spacecraft. But the Smithsonian’s main location in D.C. is painfully dated, like Walt Disney’s 1960s vision of 1997 (Walt did not foresee nu metal, I promise you).

The Museum of Flight, on the other hand, uses natural light that flatters its also-magnificent aircraft collection. You’ve got everything from rickety bundles of twigs and canvas to supersonic fighters. And they’re laid out in photo-friendly fashion, for the most part. You have a few darker rooms … but most of it is bright and airy. Perfect for aircraft.Â Perfect for making myÂ world’s best museums list.

Titan Missile MuseumÂ Green Valley, Arizona
I have never been in a museum as effective as the Titan Missile Museum. Between a cavernous interior that seems to suck up sound and tour guides who worked in similar installations, it’s less a museum and more of a time machine. You go in now, and shoot straight back to 1969. Need proof that it works? I went in to the museum with a bunch of tweens – and I doubted they would get it. But I soon overheard them saying stuff like “I can’t believe it was really like this!” Our tour guide got them involved by seating them in the control seats and running through the business end of the launch sequence.

The only way I could love this museum more is if the Titan missile itself was a bit more photo-friendly from the top. But still, it handily makes my list of the world’s best museums. It might even top it if this list went in order.

So, what makes your list of the world’s best museums?

Visiting Filming Locations Around the World

Finding Fun in the Maryland Suburbs

What Good Are Primitive Living Skills?